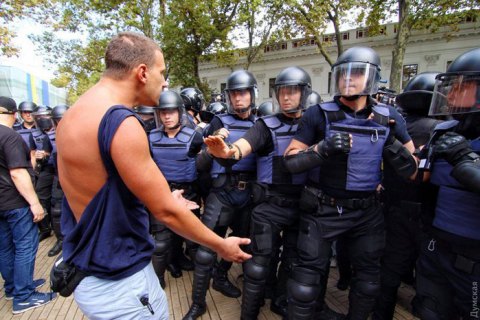 Odesa councilors have adjourned their session "indefinitely" because of the riots in front of the city hall on Wednesday, 20 September.

The council chair, Hennadiy Trukhanov, said that the session that was slated to open at 10 am will be adjourned "indefinitely" pending a special notice.

The city mayor said he had video evidence that activists from radical organizations have been bussed to Odesa to participate in mass rallies.

Trukhanov said that he was going to hand incriminating evidence over to law-enforcement agencies that "will investigate who and why is trying to escalate the situation in the city."

Protesters broke into the city hall after the councilors left.

The Odesa regional police department reported that 36 police officers were wounded in the clashes with the crowd of protesters on Dumska Square.

"20 police and 16 officers of the National Guard have turned for medical help," the Odessa police said in a statement.

Hundreds of people protested outside the Odesa city hall. The rallies were sparked by the death of three children in a fire that broke out in a summer camp outside the city over a failure of fire alarm systems.

The protesters demanded the resignation of the city authorities over the suspected embezzlement during public procurement.