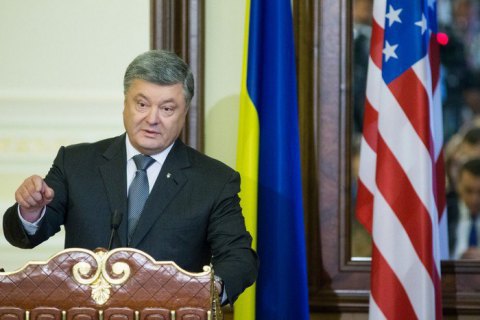 The Senate of the United States of America has approved the draft National Defence Authorization Act for 2018, Ukrainian President Petro Poroshenko reported on Facebook on Tuesday.

"Important news before my meeting with US tPresident Donald Trump. The US Senate has just approved the draft National Defence Authorization Act for 2018. The bill is expected to allocate 500m dollars to support Ukraine in security and defence," Poroshenko wrote.

The draft law, he said, authorizes the granting of defensive lethal weapons to Ukraine. It also includes provisions allowing the use of the US defence budget for the rehabilitation of wounded Ukrainian servicemen in US medical institutions, as well as for the strengthening of the capabilities of the Ukrainian air and naval forces.

"For the first time at the legislative level, it is proposed to provide Ukraine with defensive equipment like radars for air defence and over-the-surface surveillance, naval countermine vehicles, coastal and coast guard vessels," said the president.