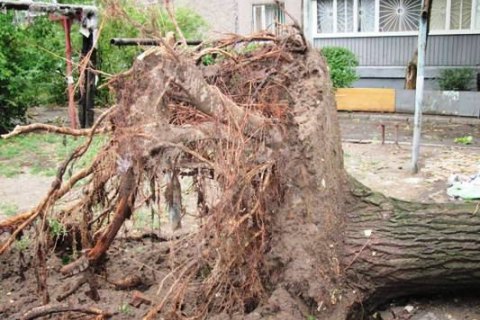 On the evening of 17 September and the night of 18 September, a heavy storm with rain and thunderstorms left 477 settlements in Western Ukraine without electricity.

In Khmelnytskyy Region, 187 settlements were reported cut off from power, in Ternopil – 114, in Chernivtsi – 73, Ivano-Frankivsk – 70, in Transcarpathian Region – 33, the press service of the national emergencies service said on 18 September.

In the city of Chernivtsi, stormwind felled dozens of trees and billboards and tore roofs. Four districts (Putyla, Vyzhnytsya, Storozhynets and Zastavna) were partially or completely de-energized.

In Transcarpathian Region, a tree fell on a railway track and blocked the Kolomyya-Rakhiv train for 15 minutes.

The national weather centre on 18 September issued warnings of strong winds with gusts of 25-30 m per sec, showers, thunderstorms and hail in the area.

This hurricane has come to Ukraine from Romania where it reportedly killed at least eight people. Another 70 people were taken to hospitals.

In the city of Timisoara, the third largest city in Romania, gusts of wind felled trees and tore down the roofs of houses. Many power lines and water supply were damaged.