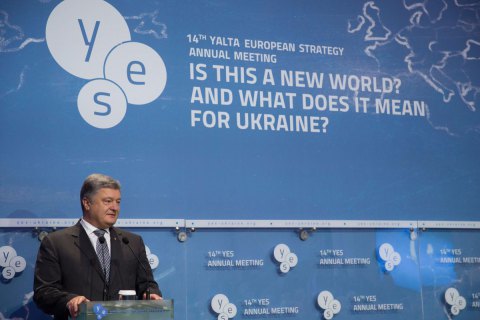 Ukraine wants to become a party to the debate on the future of the European Union earlier initiated by the president of the European Commission, Jean-Claude Juncker, President Petro Poroshenko said at the 14th annual meeting of the Yalta European Strategy on Friday, 15 September.

He spoke in support of the vision of EU further development outlined by European Commission President Jean-Claude Juncker in the State of the Union Address on 13 September.

"The suggested roadmap for a more united, stronger and more democratic union opens opportunities for a qualitatively new Europe, which is capable of responding to the global challenges of the 21st century," Poroshenko said.

"At the same time, I believe that the newly initiated debate on the future of Europe should not be limited to the current EU member states. Candidate countries and EU associated members, which aspire to share responsibility with the European Union for a new Europe, should be invited to the discussion," he said.

Poroshenko suggested that this would be a symbolic demonstration of their place in new Europe.

"The meeting of EU leaders on the future of Europe, to be held in Tallinn on 28 September, could be the best opportunity to engage them into a discussion," he said.

According to Poroshenko, it is dangerous to leave European countries striving to become part of united Europe in strategic uncertainty despite the situational challenges faced by the EU.

"This would send a signal to Russia that the revenge is still possible. And the EU, by rejecting European aspirations of its neighbours, will signal Russia that it accepts its so-called 'special interests' in the region," the president said.

He called on the West to make an important strategic decision which will radically influence further development of Ukraine in a new world.