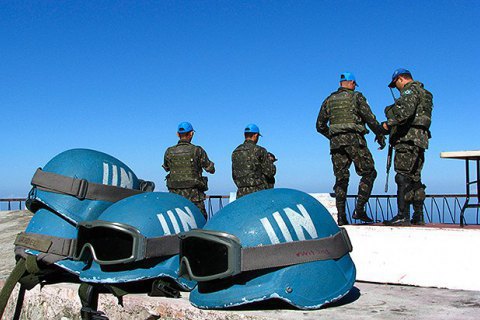 The United States supported Ukraine's stance on the deployment of peacekeepers in Donbas. The US Department of State believes that UN forces should be deployed throughout Donbas region right up to the border with Russia.

"Any such [peacekeeping] force should have a broad mandate for peace and security throughout the occupied territory of Ukraine up to and including the border with Russia in order to avoid deepening or institutionalizing the divisions inside Ukraine," said US State Department spokesman Heather Noyert, answering an Ukrinform question during a briefing for foreign journalists..

State Department spokeswoman reiterated that the Washington supports the efforts of the Normandy format countries to implement the Minsk accords. She recalled that U.S. Special Representative Kurt Volker was making direct efforts in this area.

"It is important, first of all, ensure safety conditions, and we once again call on Russia to enter a real and sustainable cease-fire," stressed Noyert, adding that withdrawal of heavy weapons and the provision of access to observers across the whole territory up to the border with Russia.

Recall, on September 5, Russian President Putin expressed support to the deployment of peacekeeping mission in eastern Ukraine, however, according to the Kremlin, such forces should be deployed only along on the line of demarcation, and Ukraine should coordinate the deployment with the "DPR" and "LPR". Russian draft resolution has been sent to the UN Security Council.

Ukrainian President Petro Poroshenko, speaking at the Verkhovna Rada on September 7, said that the peacekeeping mission should not include representatives of the "DPR" or "LPR" and Russia, and its mandate should extend to the entire territory of the occupied Donbas. Also, Poroshenko refused to agree on the parameters of the mission with the "Russian militants."

On 11 September, Putin agreed in a phone conversation with German Chancellor Angela Merkel that the UN peacekeeping mission should have access to all the territory where the OSCE SMMs conduct inspection.