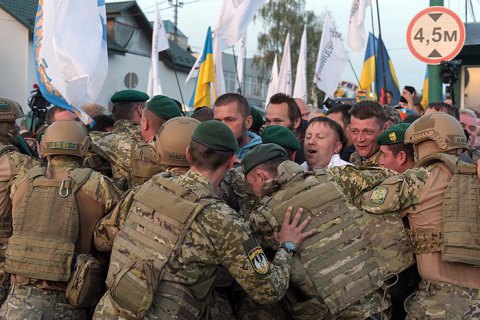 Five activists have been detained for the involvement in the Sunday events when former Odessa governor Mikheil Saakashvili and a crowd of supporters barge past border guards to enter Ukraine from Poland. David Sakvarelidze, a Saakashvili supporter and a Movement of New Forces member, on Facebook Tuesday described police actions as "political reprisals."

"We will defend each of our supporters and like-minded persons," he said.

Police said they have identified six possible organizers of the disturbances near the state border and 32 active participants of the events. Over a hundred people were interrogated as witnesses.

The disturbances are preliminary qualified as illegal convey of persons across the border, resistance to law enforcement officers, violence against law enforcers, and mass public disorder.

The State Border Service has issued several reports about the illegal border crossing, including against four journalists and ten foreign nationals.

Saakashvili arrived in Ukraine on September 10. His supporters gathered at the Shehyni checkpoint and stirred a fight with border guards in the transit zone, thus helping Saakashvili and a group of other people, including five parliamentarians, illegally cross the border.

The Lviv region police have opened a criminal investigation on the count of "illegal transportation of people across the state border of Ukraine."

Another criminal inquiry was subsequently launched on a count of "resistance to officers of law enforcement agencies performing their duties."