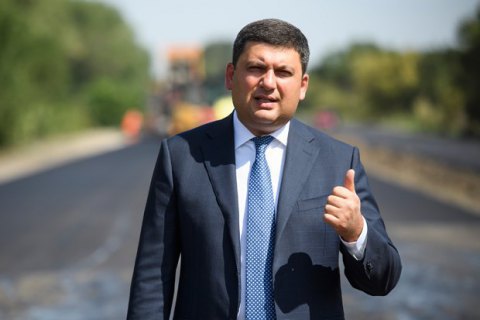 The statement was made as Groysman checked out the progress of works on the highway Kyiv - Znamyanka in Kyiv Region. The works began 2015 and are now at the final stage.

"A year ago here on this site I promised to begin overhaul of the country. All Ukrainian roads should look exactly like this," Groysman told reporters.

"My task is not to spend the budget money, but to build roads. This year we have a 30bn for the purpose. Next year we will expand the repair works with the budget of 40bn hryvnya

He said that road repair will be financed out of the National Road Fund, the resources from decentralization and funds generated by extra customs revenues.

In spring, Prime Minister Volodymyr Groysman pledged that in 2017 his government would allocate at least 30 bn hryvnia for the repair of roads. A half of the sum was to come after the re-profiling of the government debt.

On 11 September, it was announced that the deal on the re-profiling of government bonds failed.

State Fiscal Service in January-July has transferred over 8bn hryvnia to local budgets for road repairs. This was more than expected.