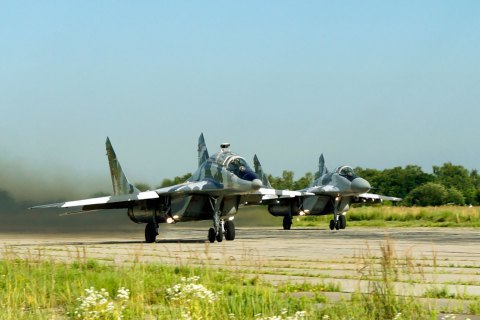 The Ministry of Defence reported that on 11 September an opening ceremony of the Ukrainian-American command-and-staff exercises involving the troops Rapid Trident-2017 was held.

This year, the exercise involved an unprecedented number of participants – about 2,500 troops from 15 countries. In addition to Ukraine and the US, contingents from Canada, Bulgaria, Georgia, Estonia, Italy, Latvia, Lithuania, Moldova, Norway, Poland, Romania, Turkey and the United Kingdom are involved in the exercises.

The press service of the Armed Forces of Ukraine also reports that almost all the military units of the Air Force have been put on alert "to check readiness for fulfillment of assigned tasks". "Reserve officers of the first and second phases are being called for military training to completing these military units to full staff," the General Staff said in a statement.

Russia and Belarus will hold strategic exercises West-2017 from September 14 to 20.

The National Security and Defence council (NSDC) Secretary Oleksandr Turchynov believes that the exercise West-2017 will test Russia's readiness for a big war with NATO countries.

President Petro Poroshenko said he considered these exercises a threat to Ukraine.