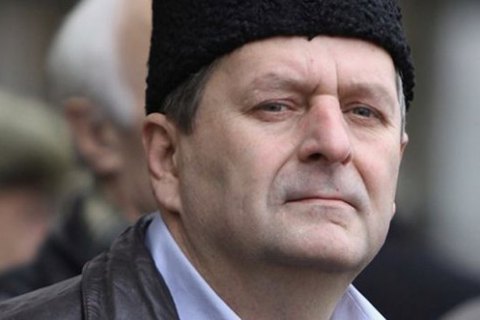 The Kremlin-controlled Supreme Court of the annexed Crimea on 11 September sentenced one of the leaders of Crimean Tatar people Akhtem Chiygoz to 8 years in a penal colony, te online publication Crimea. Realities reported Monday.

A crowd of about 100 people came to the court to support Chiygoz.

President Petro Poroshenko condemned the verdict in a statement posted on Facebook.

"The case of Akhtem Chiygoz is another court ruling of Russia, which at the highest international level – the UN – was recognized an occupant country. They can illegally restrict freedom, but the will and the truth will never be broken! One can occupy other people's land, but it will burn under their feet until it is free," Poroshenko wrote.

Chiygoz was arrested in January 2015 for participating in a rally in support of the territorial integrity of Ukraine in front of the Supreme Council of Crimea on 26 February 2014. Media footage and eyewitness accounts indicated Chiygoz was one of those attempting to keep the crowds apart to prevent violence.

Chiygoz was arrested and spent over 15 months in custody. His trial began in August 2016. He was not allowed to attend court hearings in person, participating instead via a poor Skype conference.