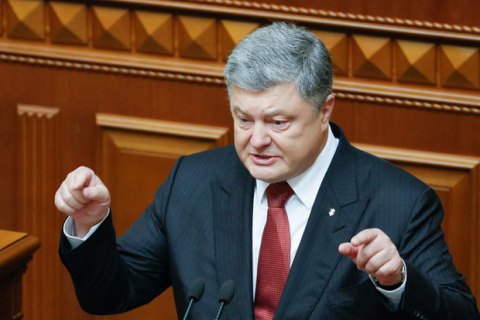 The president demanded to bring the violators of the border to justice. Photo: EPA / UPG

President Petro Poroshenko believes that the border incident with the ex-head of the Odesa Regional State Administration Mikheil Saakashvili should be the subject of legal rather political and assessment.

The president reminded that the Ukrainian citizenship of Saakashvili's was rescinded on 26 July after the State Migration Service discovered that the latter has submitted false information for the acquisition of citizenship.

"As a president, I could not have taken any other decision because it would be criminal inaction," Poroshenko said when speaking to a meeting on Monday.

The president said that Saakashvili had to challenge his decree in the Supreme Administrative Court. "I do not like Ukrainian courts – [appeal the decision] in the European Court of Human Rights," Poroshenko added.

Instead, said Poroshenko, Saakashvili resorted to the use of force and illegallycrossed the border.

"Whoever violates the state border – be it militants in the east in or politicians in the west – there should be a clear legal responsibility," he said.

Poroshenko stressed that the law enforcement agencies must investigate into the incident, and they have begun to do so.

"I hope this gentleman will in due time will show the same zeal to make his way to Georgia," Poroshenko said about Saakashvili.

On Sunday, Saakashvili, whose Ukrainian citizenship has been voided, crossed into Ukraine at the Shehyni checkpoint. A crowd of the politician’s supporters, including five MPs and former acting head of the Security Service of Ukraine Valentyn Nalyvaychenko broke through the cordons of the Ukrainian law enforcers, forced the group’s entry to the territory of Ukraine evading standard border control procedure.

During the incident, 12 police officers and five border guards were traumatized.

Prosecutor-General Yuriy Lutsenko promised to bring the organizers of the illegal crossing of the state border to justice.