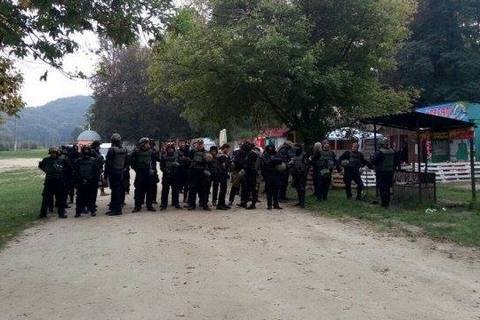 Police in Lviv's Lychakiv district discovered in the neighboring town of Vynnyky a group of fifty men in military uniform, which police believed could be in possession of weapons and explosives, the press service of Lviv regional police department said on Tuesday, 12 September.

Law enforcers on site established the identity of citizens and checked the group for possession of weapons, explosives and other prohibited items.

MP Semen Semenchenko said in a Facebook comment that the men were the veterans of the battalion Donbas. According to him, the group was vainly searched for four hours and no weapons or explosives were found.

Semenchenko is a member of Self-Help faction in the Verkhovna Rada, which is an ally of Mikheil Saakashvili's Movement of New Forces.

In the meantime, Zaxid.net claimed that the "Donbas" members have demonstrated that they had unloaded weapons.

The police did not allow the uniformed men to leave the territory, after which Donbass members barricaded themselves. The police had to be reinforced by several dozens National Guards.