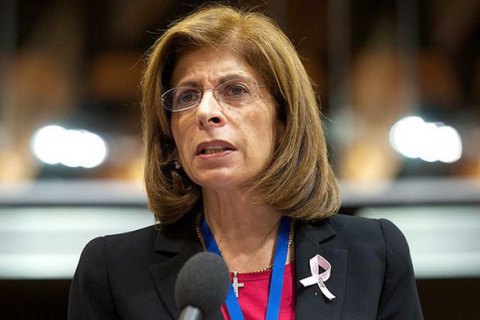 President of the Parliamentary Assembly of the Council of Europe Stella Kyriakides called on Russia to lift the ban of the Mejlis of Crimean Tatar people.

In a statement on the PACE website she welcomed the release of the leaders of Crimean Tatar Akhtemov Chiygoza and Ilmi Umerov, members of the Mejlis "an important and traditional structure of Crimean Tatar community"

"Their release is a step in the right direction. I very much hope that the release of these two leaders will be soon followed by others, and I also urge the Russian authorities to remove all restrictions which limit the free functioning of the Crimean Tatar Mejlis," the president of PACE said.

In last April, the "Supreme Court" of Crimea banned the Mejlis, recognizing it as an extremist organization. The initiator of the process was the so-called "prosecutor" of Crimea Natalia Poklonskaya, which stated that the Mejlis allegedly collaborating with the organization "Hizb ut-Tahrir", recognized in Russia as a terrorist organisation. After that, the Mejlis and Kurultay announced moving into the state of emergency, and decided to transfer the central office of the Mejlis to Kyiv.

In September, the Supreme Court of Russia recognized the ban of the Mejlis as lawful.

In April 19, the International Court of Justice called on the Russian Federation to abolish the ban of the Mejlis and guarantee the rights of Crimean Tatars and Ukrainians on the peninsula.

On April 22, the occupation "authorities" of Crimea said they were not going to review the decision, and that the Crimean Tatars allegedly are entitled to create public structures to defend and advance their interests.