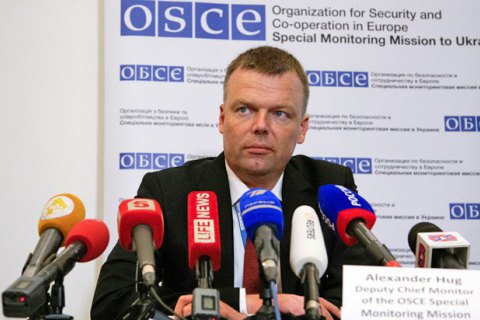 Principal Deputy Chief Monitor of the OSCE Special Monitoring Mission to Ukraine Alexander Hug warned of the inevitability of escalation of the conflict in Donbas.

"The parties have not withdrew their forces and hardware. We see them in close proximity along the entire contact line, which leads not only to violations of the ceasefire (and we recorded 3,286 such violations last week), and inevitably leads to an increase in the number of violations in the future," Interfax-Ukraine quoted Hug as saying at a briefing in Kyiv on Friday, 27 October.

SMM recorded 86 violations of the disengagement of forces and hardware from the contact line in Donbas, Hug said.

"Last week, we have seen 86 violations of the respective lines of weapons disengagement, including 32 in a controlled and 54 in the areas not controlled by the government... SMM recorded the presence of landmines along the contact line. We have observed recently installed mines in the area of the disengagement of forces and hardware in the area of Zolote, approximately 120 meters from the checkpoint of the so-called LPR." he said.

Hug said that Donbas civilians continue suffering because of the conflict.

"This conflict is not in the interests of the people. It is incited by those who volunteered to resolve it. SMM is not engaged in the search for the guilty. 505 observers report facts... The facts are clear: the parties have not withdrawn arms and failed to carry out mine clearance," the OSCE mission deputy chief said.

On 7 October, the US State Department special envoy for Ukraine Kurt Volker and Putin's aide Vladislav Surkov held talks , in Belgrade, on a ceasefire in Donbas.

According LB.ua sources, the Belgrade meeting of Surkov and Volker failed to achieve any concrete agreements. It is expected that prior to the next meeting slated for early November at a place yet to be agreed upon, the Russian party will elaborate its vision of the proposals of Western partners, in particular – with respect to the mandate of UN peacekeepers.

Before that, Volker will visit Kyiv on 27 October.