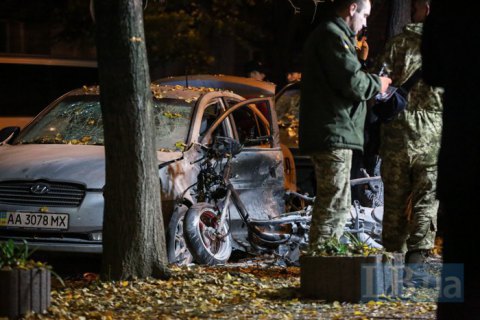 After the Wednesday night bomb blast in Kyiv' Solomyansky district that wounded four and killed one passer-by, the law enforcers commenced a criminal investigation into the incident.

The investigation sees the blast as a terrorist attack, First Deputy Prosecutor of Kyiv, Pavlo Kononenko, said as quoted by Hromadske on Thursday, 26 October.

The investigation will be conducted by the SBU in Kyiv under the procedural control of the prosecutor's office of Kyiv.

One person was killed by a blast outside the office of Espreso TV in Kyiv.

A bomb went off outside the office of Espreso TV in Kyiv's Mitskevich St at 10 p.m. local time on 25 October as MP Mosiychuk and Vitaliy Bala were leaving the channel after a late-night show.

MP Ihor Mosiychuk (Radical Party), his guard and the director of the Situation Modeling Agency, Vitaliy Bala, were injured by the blast. The fourth person has not been named.

Mosiychuk was admitted to hospital with multiple shrapnel wound.