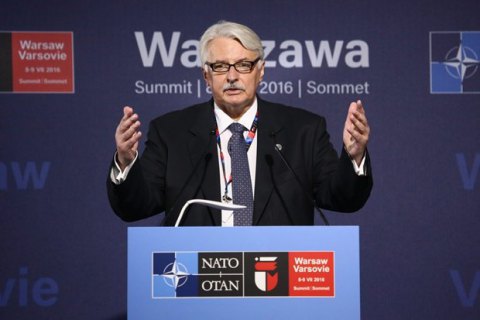 In a recent TV appearance, Waszczykowski said that Ukraine is taking advantage of its importance for Poland's security and tries to put historical rifts on the backburner.

The minister stated that Poland would never trade historical truth for geopolitics.

In particular, Waszczykowski stressed that it is impossible to compare the activities of the Ukrainian Insurgent Army (UPA) and the Polish Home Army (Armia Krajowa) and stressed that the Home Army has never been involved in murders of the same scale as those committed by the UPA in Volhynia.

"There is no symmetry here," said the minister.

Waszczykowski said that his country may slam a number of restrictions on Ukrainians unless Ukraine changes its behavior on matters sensitive for Poland.

"If we do not reach an agreement, we will initiate procedures that will ban entry to persons holding extreme anti-Polish position," said the minister.

"People who ostentatiously wear SS Galicia uniform will have no place in Poland," onet.pl quoted Waszczykowski as saying.

The minister lashed out at Ukrainian officials who, for political reasons, hamper the continuation of exhumation works and the restoration of the Polish places of memory in Ukraine.

Waszczykowski reminded that Poland has refrained on Kyiv's request from placing the image of Eaglets Memorial in Lviv on Polish passports.

"We have never seen a reciprocal gesture – the admission of Polish conservators at this cemetery," the minister complained.

Waszczykowski said he should think whether to recommend President Andrzej Duda visit to Ukraine.

A few months ago, Waszczykowski warned that Ukraine will never join the European Union unless it stops glorifying Stepan Bandera. Prior to that, the leader of the country's ruling party Yaroslav Kachinsky made a similar statement.