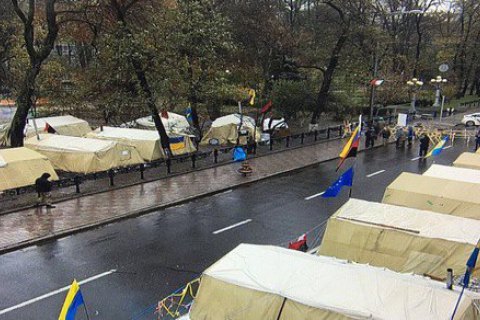 Several dozen people stay in the tent camp near the Verkhovna Rada, the Interior Ministry reported on Friday, 3 November.

"As of 9:00, five persons representing the volunteer battalion Donbas are staying in the tent camp on Hrushevskyy St. About 10 people occupy the tents the segment of street between Shovkovychna and Lypska, and another 15 people stay on the Constitutional Sq. and the park in front of the parliament," police said in a statement.

The rally in front of the Verkhovna Rada started on 17 October, when representatives of political forces and public organizations, like Mikheil Saakashvili's Movement of New Forces, Fatherland, Self-Help, Citizenship, Demallaince, Freedom and the National Corps gathered to demand abolition of parliamentary immunity, creation of an anti-corruption court and introduction of proportional representation system through open lists.

After that, the Verkhovna Rada sent bills to the Constitutional Court on the abolition of immunity, but refused to change the electoral system. The bill on the anti-corruption court has not yet been submitted to the parliament.

On 19 October, most of the parties and movements pulled out and said they would continue protest by other methods. At the same time, the supporters of Saakashvili and Self-Help lawmakers Sobolev and Semenchenko stayed in the tents.

Later, Saakashvili said that the tent city will be removed after 7 November.