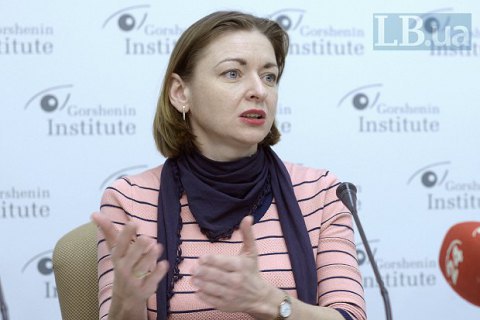 The lack of information about the selection of judges to the Constitutional Court on presidential quota proves that the whole process is pure simulation as was the case with the selection of candidates on the quota of the Congress of Judges, an expert of the Center for Political and Legal Reforms (CPDC), Yulia Kyrychenko, told a round table conference at Gorshenin Institute on Wednesday, 20 December.

"Over the past two months, we have closely monitored of what the president's administration has to say. Everything is in a fog, however. Any information on interviews with candidates appears on the website of the President's Administration on the same day, that is, for a tick. Motivation letters and biographies of the candidates are made public much later and only upon repeated requests from various organizations," Kyrychenko said.

Interviews with candidates are held behind closed doors, the expert complained.

"The public has no idea of how they check candidates for compliance with the requirements for the position of a judge of the Constitutional Court, particularly, "high moral qualities" and "recognized lawyer's competence," Kyrychenko said.

"We have learned that two candidates who scored the best in the rankings during the selection process by a wide margin from the rest of runners, will hardly get judicial jobs in the Constitutional Court on the president's," said Kyrychenko.

The decision on the appointment of judges to the Constitutional Court on presidential quota is expected to be announced this week.