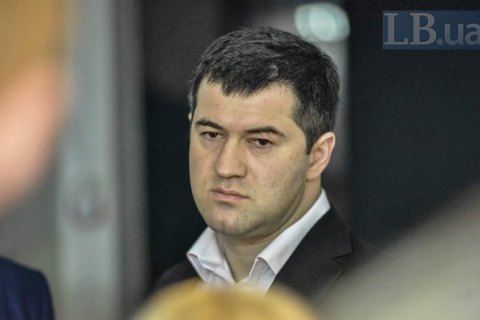 The Finance Ministry has asked the Cabinet of Ministers to dismiss the suspended chairman of the State Fiscal Service (SFS), Roman Nasirov.

"On the basis of information received from the UK Embassy in Ukraine about the British citizenship of the SFS chairman, Roman Nasirov, in accordance with requirements of Article 84 of the Law of Ukraine 'On civil service', the Finance Ministry filed a motion to dismiss Roman Nasirov from civil service in accordance with the established procedure in connection with the loss of the right to hold public office or the restriction thereof, in view of the establishment of the fact that he held foreign citizenship, and to dismiss him from the post of the SFS chairman," reads the document.

Nasirov, although he formally remains the head of the SFS, is being probed on charges of abuse of power and official position and forgery.

The investigation believes that Nasirov was involved in the so-called gas scheme of Oleksandr Onishchenko. According to the National Anticorruption Bureau of Ukraine (NABU), the suspect in 2015 took a number of groundless and illegal decisions on royalties for the use of subsoil to gas extraction companies involved in the scheme. Investigators say his actions inflicted over 2bn hryvnyas in damages on the state.

Nasirov took these decisions retroactively and without the Finance Ministry's approval. He concealed the fact that the companies in question had tax arrears, which was in violation of the contracts on joint activity and could have become a basis for the termination of their contracts.

Nasirov is facing three to six years in prison.