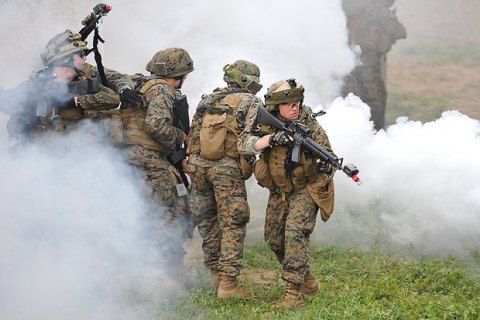 Canadian military instructors have trained more than 5,000 Ukrainian servicemen in western Ukraine since 2015, President Petro Poroshenko has said in a speech to the Ukrainian, Canadian and American military at the Yavoriv training range.

"You have trained over 5,000 Ukrainian military, including more than 160 snipers, and 120 soldiers have been trained in tactical medicine. Thanks to the practical assistance of our Canadian partners, we continue to develop and modernize the potential of the antiterrorist operation (ATO) troops," Poroshenko said as quoted by 112 Ukrayina TV.

Military instructors from the Royal Canadian Regiment, along with other foreign and Ukrainian counterparts, are preparing to begin a new stage in the preparation of yet another ATO combat unit.

"I would like to thank Canada for the absolutely firm support for the sovereignty, territorial integrity and independence of our state from the very first moments of Russian aggression. I want to thank the Canadians who not only extended this support but also coordinated efforts in international organizations, imposed sanctions and supported us in the United Nations," he said.

The Ukrainian president noted Canada's important role in G7 where it is presiding this year.

"We are grateful for the fact that Canada has co-sponsored all resolutions in which Ukraine offers to clearly state the fact of aggression and the programme of the liberation of Ukrainian soil from the occupiers," Poroshenko said.

In the framework of the UNIFIER training mission, the Canadian Armed Forces help Ukraine to build up the capacity of Ukrainian troops in support of the country's efforts to maintain the sovereignty, security and stability.

UNIFIER is to last until late March 2019.