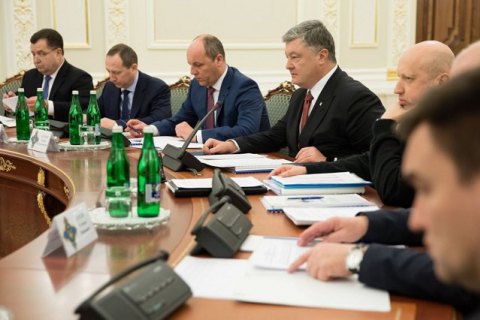 The National Security and Defence Council (NSDC) has approved the bill "On national security", its press service reported on Thursday, 18 January.

The security bill was developed in close cooperation with experts from the North Atlantic Treaty Organization (NATO), the United States and the European Union to adapt the Ukrainian legal framework to that of NATO member states.

After the Ukrainian parliament adopts the bill, it should become the basis for the development and update of legislation in the field of national security and defence.

According to President Petro Poroshenko, the document also provides for the legislative consolidation of Ukraine's plans for membership of NATO and the European Union.

"The project sets the task of Ukraine's membership of the European Union and NATO, which must become an unconditional guarantee of security for the sovereignty and territorial integrity of our country," the head of state said during the discussion of the bill.

NSDC Secretary Oleksandr Turchynov said the adoption of the bill "On the national security of Ukraine" should become an important step in protecting the Ukrainian statehood and countering the Russian aggression.

Earlier, the NSDC approved the main parameters of the state defence order for 2018-20.