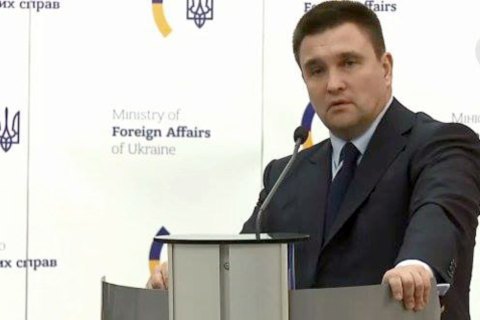 About 3 million Ukrainians currently live in the Russian Federation, Ukrainian Foreign Minister Pavlo Klimkin has said at a meeting with the Ukrainian community in Toronto, according to the Ukrinform news agency.

"Russia is waging war against us, but 3 million Ukrainians still live in Russia. That is, almost one in 12 Ukrainians is now in Russia. Among them there are many who do not like Putin or Russia, but feel that they have no other choice. They say: we have been earning money this way our entire life - and they need to be understood," Klimkin said.

In his opinion, this situation needs to be changed. "We cannot continue this way. We have certain ideas and we are working on them with a view to not having 3 million Ukrainians live in Russia, because this is a very sad situation for me," the foreign minister noted.

According to him, the rapprochement between Ukraine and the EU has somewhat affected the distribution of Ukrainian labour migrants. "Europe has opened and we see that some of them are already moving from Russia to the EU or returning to Ukraine. At the same time, this is happening very slowly," Klimkin said.

The Foreign Ministry earlier said that there were 1 million Ukrainians in Poland. The Polish authorities put the number of Ukrainian labour migrants at 2 million.