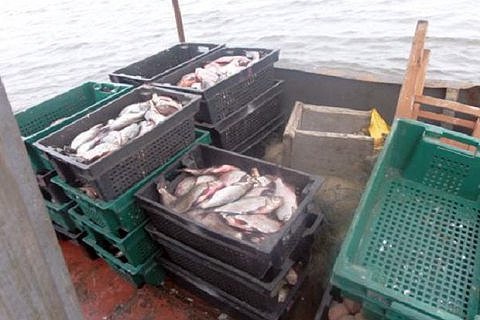 Russian authorities detained a Ukrainian fishing boat, YMK-0041, registered in Ochakiv, in the Black Sea on 4 May. The crew - five Ukrainian citizens - was taken to Russia-annexed Crimea, Interfax has quoted the press service of the border department of the Russian Federal Security Service (FSB) as saying.

It said that the ship had been detained "for poaching flounder".

"On 4 May 4, the border guard ship Ametist detained a Ukrainian boat engaged in the illegal fishing of flounder-kalkan with net in the exclusive economic zone of the Russian Federation to the west of the Tarkhankut Cape," the report said.

"The illegal fishing gear - several kilometres of net - was confiscated, the ship and its crew (five citizens of Ukraine) were delivered to the territory of Crimea for procedures," the border department said.

Earlier, the State Border Service of Ukraine warned that in response to the detention of the Nord ship in the Sea of Azov, after 30 April representatives of the Russian Federation have been stopping non-military vessels heading for the Mariupol seaport for inspection and identification of the team on a daily basis.