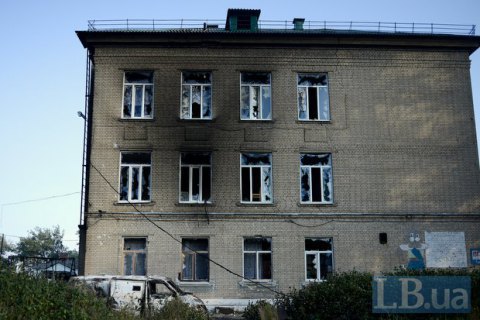 At least 45 schools have been damaged or destroyed over the last 16 months in addition to more than 700 schools damaged since the conflict began, UNICEF said on 4 May.

"Children are learning in schools with bullet holes in the walls and sandbags in windows, bomb shelters in the basements and shrapnel in school yards," UNICEF Ukraine Representative Giovanna Barberis said.

Some 200,000 girls and boys were forced to learn in militarized environments, amid volatile fighting and dangers due to unexploded weapons of war, UNICEF said.

"UNICEF and partners have monitored at least eight instances where military and armed groups’ sites are within 500 meters from a kindergarten or school, and two separate locations where schools and these sites are only a few meters apart. Since the beginning of the current school year, UNICEF has monitored six former school buildings that have been occupied or used by military or armed groups," it said.

Children face dangers due to the proximity of military sites, such as bases, storage facilities and security check points, to schools and kindergartens along both sides of eastern Ukraine’s contact line.

As reported earlier, 218 children have been killed in Donbas since the conflict began.