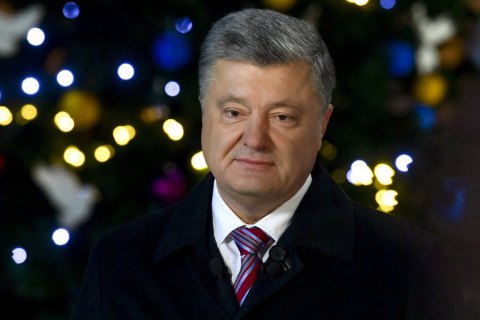 The worst is behind for Ukraine, President Petro Poroshenko has said in his New Year speech.

The following is the text of his address as published on the president's official website:

A moment later and the chronicle of the year 2018 will be left in the archive of the Ukrainian history. It has a special place there. Near 1991, when our state independence was declared.

On December 15 here, on St. Sophia, the Unity Council was held. Thousands of people convened on the square and were not ashamed of tears. And those were tears of joy. At last, the Autocephalous Orthodox Church of Ukraine recognized by the world Orthodoxy was born.

The struggle for the independence of our church lasted for hundreds of years it is only now that we have succeeded.

This is a true miracle!

It is a sign of God that we, Ukrainians, will all be fine.

Shortly, along with the good news of the birth of the Savior, Ukraine will receive the long-awaited Tomos - a charter from the Ecumenical Patriarchate. It will document our spiritual independence.

We have become further from Moscow and closer to Europe. This is a clear strategy that has been steadfastly followed over the past five years. We go our own way. Neither promises of manna from heaven, nor grain of despondency, nor potion of discord - nothing should turn us back.

"The power of the people lies in the unity, God, give us the unity," - I would like these words to become the motto of the next year for the authorities, society and every citizen. Especially since the year 2019 is the 100th anniversary of the Zluky Act, the centennial of our unity.

We do not want anything more than peace. And no one wants peace more than we do. So, on behalf of you, let me congratulate, first of all, Ukrainian soldiers. They guarantee us peace and quiet on this New Year's Eve.

Let the seamen captured by Russians also feel our gratitude and the warmth of our hearts. And wounded among them - Andriy Eyder, Vasyl Soroka, Andriy Artemenko. And Ukrainian political prisoners in Russian prisons. And our citizens who became hostages in the temporarily occupied territories.

I appeal to millions of Ukrainians in Crimea and on the other side of Donbas. We will definitely return to you with peace, no matter how long it may take. Our family will surely reunite at one table, at which the New Year is met by Kyiv time.

The hardest thing has already passed, and the worst is also behind. The gradual growth of the economy and the restoration of living standards are ahead. This is the result of our common, hard work.

The main thing is not to trample the sprouts of development, gained at the cost of great sacrifices and enormous efforts of each of you, in the electoral race. Then we will surely win.

I wish you all happy New Year!

May our destiny stand with us!