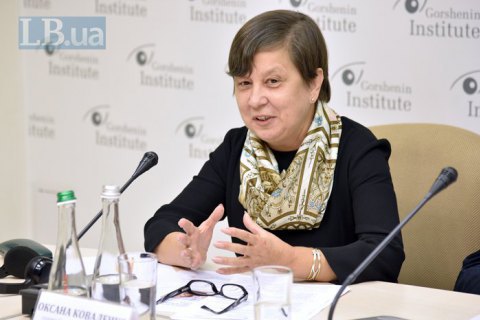 An increasing number of Ukrainian students study Chinese, Japanese and Korean as a second foreign language, Oksana Kovalenko, leading expert at the department for general secondary and pre-school education of the Education Ministry, has said at a roundtable entitled "Will children know foreign languages after they complete the New Ukrainian School programme?" and co-organised by Gorshenin Institute and the British Council Ukraine.

"All languages are important to us. The Education Ministry does not take separate steps concerning the study of one or another language, we are trying to focus our efforts on the teaching of four languages that are supported by the state through textbooks, curricula and teacher training - English, German, French and Spanish. Of course, in addition to these four languages, we are talking about other languages of the European Union, the languages of our neighbours - Polish, Hungarian, Romanian, Czech and Slovak. These languages can be studied as languages of national minorities and as foreign languages.

In addition, Oriental languages — Chinese, Japanese and Korean — are becoming more and more popular in Ukraine. Parents also have such requests. And many educational institutions introduce Oriental languages as a second foreign language. Curricula are being prepared, there is communication with organizations that represent these countries and help us with materials and teacher training. So, it cannot be said that we are limited by some kind of framework. Today we see a variety of languages in Ukraine and this is very good because languages are development. More and more parents are inclined to believe that one language is no longer enough. Whereas officially the second foreign language in Ukraine is studied from the fifth grade, parents increasingly more often speak about learning a second foreign language in primary school," Kovalenko said.

According to the education official, today an extremely important point is the training of teachers which will help them master modern technologies and modern approaches to teaching languages.

“We can prepare a brilliant programme, brilliant textbooks, but it all starts when the teacher enters the classroom and closes the door. It all depends on the teacher, on how the teacher uses this curriculum, these standards, these textbooks, what they will do with them and how they will present them to children. What methodology they will choose, which approaches they use. Whether they take into account some distinctive features of their class or group, because all classes are different and approaches to them cannot be the same.

Thus, it all depends on who enters the classroom and for what purpose. Everything in the end should work in system - new textbooks, new materials and a new teacher. All of this takes time, it is impossible to do everything at once, in one year. Also, all of this requires efforts both on our part and on the part of teachers, parents and children. The Education Ministry and international organisations can do a lot, but if there is no step forward, nothing will work out," Kovalenko said.