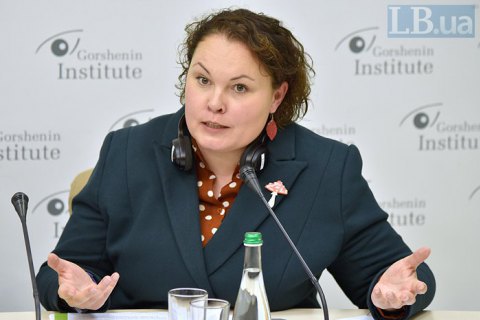 The New Ukrainian School's approach to study of foreign languages is fully in line with global trends and European requirements, Dr. Katharina Buck, Deputy Head, Head of Language Department at Goethe-Institut Ukraine, has said at a roundtable entitled "Will children know foreign languages after they complete the New Ukrainian School programme?" and co-organised by Gorshenin Institute and the British Council Ukraine.

Buck continued: "Another important point is that there is evidence that the study of foreign languages contributes to intellectual development. This is very good for your brain. The more languages you learn, the easier it is to learn them, and the easier it is to learn other subjects. That is, it is not only knowledge of the language, but also a skill, a set of skills necessary to ensure better communication, better understanding."

In her words, multilingualism and integrated language teaching is a requirement of the modern world.

"For opportunities to be realised, it is very important for us that languages are studied correctly, that languages are studied with an emphasis on communication and a focus on competences. So that all these elements - reading, writing and listening – be studied with an emphasis on real situations that would ensure better use of foreign languages. A good example would be special training programmes that we organised. This is, first of all, integrated training. For these reasons, we believe that the New Ukrainian School approach meets our interests because the main focus here is made on the competences and use of foreign languages," Buck said.