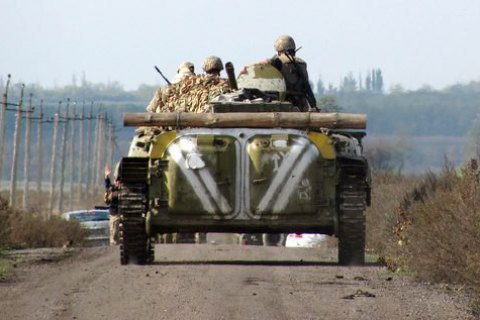 The Joint Forces Operation Command has published a detailed procedure for the disengagement of forces, which was agreed upon at the talks in Minsk on 1 October.

According to Donbass.Realii, the separation of forces should begin in the area of Zolote and Petrovske, followed later by four more areas and subsequently along the entire line of contact. About 30 settlements may end up in the so-called "gray zone". However, representatives of the police, the National Guard and the State Border Service, social services, local authorities and civil-military administrations will continue to operate there.

The process of withdrawal at each site will take 30 days, including three days for the direct pullback of forces. The process can begin only after seven days of a complete ceasefire in the disengagement area confirmed by the OSCE mission.

Depending on the situation in each of the sections, troops can be pulled back by about 2 km.

After a week of silence, the parties shall notify the OSCE SMM from which frontier, what composition of forces and hardware will be withdrawn, as well as to which frontier they will be withdrawn. On the second day, the sides should notify their readiness to start the disengagement, and on the third day the movement of personnel and equipment will begin.

After the withdrawal of troops, demining and dismantling of fortifications are expected to be held. On the 29th day, the parties will report on the completion of all steps to be verified by OSCE SMM representatives.

The disengagement of forces in Petrovske and Zolote has not yet begun due to regular shelling.