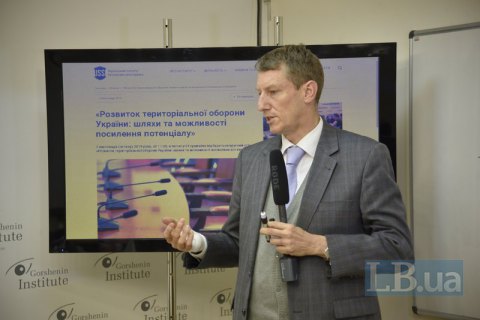 The system of territorial defence in Switzerland is a bridge between civil and military authorities, the defence attache of the Swiss embassy in Ukraine, Col Urs Sulser, has said at a roundtable "Development of Ukraine's territorial defence: ways and opportunities for boosting potential" co-organised by Gorshenin Institute and the Ukrainian Security Studies Institute.

"In Switzerland, which has 8 million residents, there are about 180,000 servicemen. We have a system of reservists: 95% of the military are reservists. After military education, they continue their civil career. Inside the armed forces we also have a territorial defence system in four regions of Switzerland. Their emblem is a bridge - a bridge between civil and military authorities," he said.

Sulser continued: "They know exactly where the critical infrastructure is located - airports, ammunition depots, hospitals. They always have access to telecommunications, engineering troops, which are alerted in the event of technological disasters. They also have a headquarters, and when the civil authorities cannot solve the problem, they get involved in efforts in their region."