The Ukrainian Foreign Ministry will hold additional consultations to determine the country's position on the political status of Alyaksandr Lukashenka (Alexander Lukashenka) who got inaugurated as president of Belarus today. Foreign Minister Dmytro Kuleba reiterated that Ukraine does not consider the Belarusian presidential election neither free nor fair.

Ukraine seeks full integration into the EU, President Volodymyr Zelenskyy has said in an interview with the Slovak business website Hospodárske noviny. "We would like to receive a clear, unambiguous prospect of membership for Ukraine from the EU," he noted, describing the Union as Ukraine's key partner in restoring the sovereignty and supporting reforms.

In the same interview, Zelenskyy also said that he would like dialogue with Russian President Volodymyr Putin to be more effective as it "helps to find necessary solutions which are important for the entire Europe as well as Ukraine".

A number of fake reports have been posted on the websites of several regional police directorates as a result of unauthorized intrusion into the official website of the National Police of Ukraine registered at 11.45 a.m. The fake reports talked about a radioactive discharge at the Rivne nuclear power plant and the death of servicemen at the Yavoriv training range in Lviv Region. Police are investigating the breach of their websites' security and carrying out maintenance works.

President Volodymyr Zelenskyy has visited Mykolayiv and Kherson regions to check on the international military exercise Joint Endeavour 2020. His office noted that it is the first exercise of such scale since the country achieved NATO Enhanced Opportunity Partner status in June. 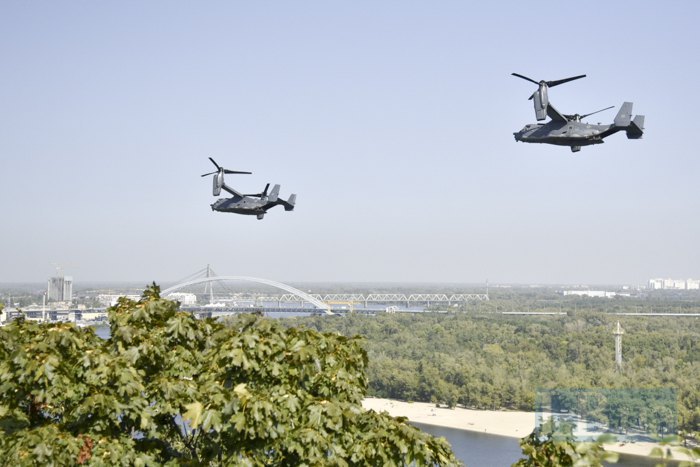 The US CV-22B Osprey tiltrotor aircraft, which are taking part in the Ukrainian-US exercise Fiction Urchin, flew over the Dnipro River in Kyiv today, the US embassy in Ukraine has said.

The Cabinet of Ministers has approved a bill on the creation of a national military cemetery in Kyiv Region. It is yet to be approved by parliament.

Two Ukrainian servicemen got wounded after triggering an unidentified explosive device near Pisky, Donetsk Region, the East Operational Command has said. They were hospitalised with wounds of medium gravity.

The Russian occupying authorities put pressure on Ukrainian citizens in Crimea, forcing them to give up their Ukrainian passports, Kyiv's permanent representative at the UN, Serhiy Kyslytsya, has told Krym.Realii.

The Cabinet of Ministers has decided to increase the capital of state-owned Ukreximbank by 6.8bn hryvnyas, Finance Minister Serhiy Marchenko has said.

The national oil and gas company Naftogaz Ukrayiny reported 11.5bn hryvnyas in net losses in the first six months of 2020. The company said that despite that it paid 39.6bn hryvnyas in dividends to its main shareholder, the state of Ukraine.

Zelenskyy has signed a decree to transfer the national atomic energy company Enehoatom under the control of the Cabinet of Ministers.

The National Bank of Ukraine has approved the nomination of Pireus Bank ICB board chairman Serhiy Naumov for board chairman of the State Savings Bank (Oschadbank).

Incumbent Kharkiv mayor Hennadiy Kernes, who is being treated from the coronavirus in Germany, will seek re-election too.