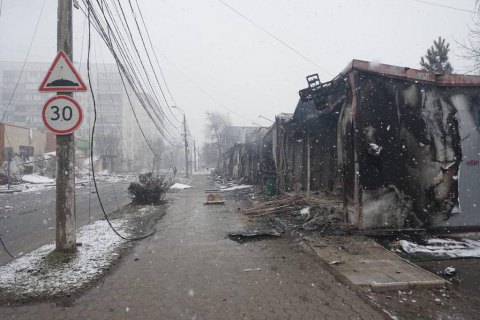 The mayor of Mariupol, Vadym Boichenko, reported on the organization of a humanitarian corridor from the city.

"It is now being determined when to open the humanitarian green corridor and the beginning of the silence regime for Mariupol, - wrote Boichenko. This will allow the beginning of the reconstruction of the city's critical infrastructure: light, water, and mobile communication. In addition, there will also be an opportunity for Mariupol to provide the necessities of food and medicine ".

It was reported that in Mariupol, there had been no mobile phone, heating, water, or light for three days. Five days, the city was under shelling, and the inhabitants were sitting in the basements.

There are 300 wounded in hospitals, but hospitals are being shelled. In a commentary to Liga.net, Vadym Boichenko also said that the housing fund of the 150,000-strong Livoberezhnyy district was almost lost.

The "Azov" regiment, the Marines, and the police continue to defend the city.

The defenders of Mariupol hold the defense. Heavy battles continue, - told deputy commander with call sign Kalyna in a telegram-channel of regiment "Azov. - The dominant faction attempts to break through the defenses and enter the city. It is important to keep Mariupol because this is the last city to prevent Russia from creating a land corridor from Russia to Crimea. Everyone must understand. Mariupol cannot be lost because it is the last fortress of Ukraine on Pryazovia".