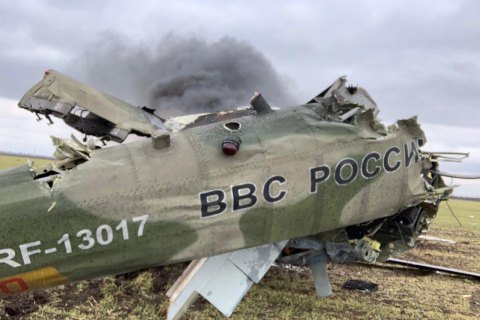 Units of the Armed Forces of Ukraine destroyed the commander of the 247th Guards Assault Regiment of the Southern Military District of the RF Armed Forces, Colonel Konstantin Zizevsky. Two planes of the Russian occupiers, five helicopters, and one enemy UAV were also shot down. Three pilots were taken prisoner and one was killed.

This was reported by the General Staff of the Armed Forces.

On the outskirts of Brovary, near the city of Peremoha in the Kyiv region, the defenders of Ukraine launched an airstrike on the 15th separate motorized infantry brigade of the Central Military District of the Russian occupiers. Enemy losses are yet to be determined.

Meanwhile, Russian troops continue to launch missile and bomb strikes, including the usage of bombing aircraft on civilian infrastructure. An airstrike on Bila Tserkva took place today where more than 20 houses were damaged.

In Irpen, the bombing damaged a railway track and disrupted a train for evacuating civilians.

The headquarters also stressed that the actions of Russia's private military campaigns (APC) to recruit personnel for the war against Ukraine have intensified. The headquarters of Private Military Company "Wagner" are already deployed in Rostov-on-Don.

The occupiers also continue to bring in Russian crowds purporting to be local residents to prepare video reports on the "success" of the "operation" in Ukraine.

The Chief Directorate of Intelligence of the Ministry of Defense earlier published the list of the Russian military who invaded Ukraine from Belarus.