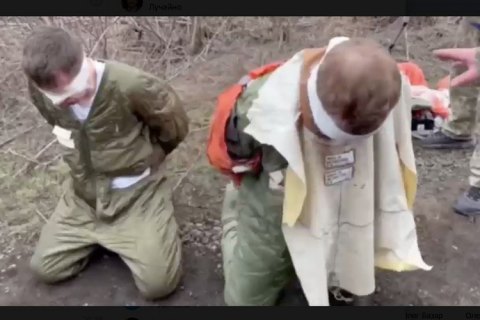 The head of the Odessa Regional Military State Administration, Maksym Marchenko, reported it in Telegram.

"At about three o'clock in the afternoon, our air defense forces shot down two enemy fighter aircraft. Many residents of Odessa heard an explosion today – it was one of the fighter aircraft that fell into the sea near Odessa. The second fell in the north of the region," he said.

Marchenko clarified that the pilots were caught and they are being taken for interrogation.

"Two planes less is dozens of lives saved," he reminded.

According to the Naval Forces, one Su-25 fighter was shot down in Ochakiv (Mykolaiv region).

"The Russian Federation has been trying to destroy the city of Ochakiv for days, including constant air raids, trying to intimidate civilians ... Today, on March 5, during another air raid, one of our military sailors shot down a Russian Su-25 jet aircraft. The pilots were captured," the Ukrainian Naval Forces said.

The State Border Guard Service of Ukraine released a video of the interrogation of Russian prisoners.

The pilot of the downed Su-25 said that they were from the military unit of Saki town in occupied Crimea.

As a reminder, today, the Ukrainian soldiers shot down the enemy Su-25 jet aircraft in the sky over Chernihiv. One of the pilots died, the other one was taken prisoner. The dead pilot was involved in launching missile and bomb strikes on civilians in Syria. Since 2015, he has been listed in the Myrotvorets database.

Also, the Ukrainian military in the Mykolayiv region destroyed four helicopters of the Russian occupiers; three of them were shot down by one marine.