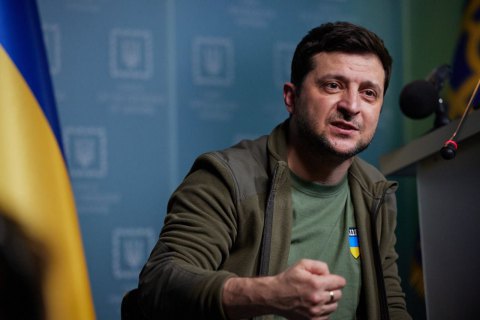 Ukrainian President Volodymyr Zelensky addressed the Ukrainians and stated that all of us together withstood the military attack of the Russian Federation. The enemy continues to bomb our cities and destroy the infrastructure. But all Ukrainians together will rebuild their country.

"Our free people! You are now at the height of your spirit. At the maximum of your capabilities. Every soldier who is on the lines of defense. Every doctor who saves lives. Every firefighter who stops the fire. Every entrepreneur who continues to work. Dozens and dozens of other professions. Millions of people who became a single superpower of spirit. Programmers who joined the information troops. All those who joined the defense. Teachers and educators who did not leave children. Police. Civil servants. We have all withstood the blow. We will all rebuild our state," - Zelenskyy said.

“Kherson. Melitopol. Berdyansk. Konotop. The reality of all cities, towns and rural communities that push away the occupiers with their determination and unity. Freedom Square in Kherson is the whole Ukraine. The streets of Konotop, where locals yell at the occupiers, are Ukraine. The Ukraine we know, love, protect and will not give away to any enemy," - Zelenskyy said.

He added that protesting when your city is occupied - is a special heroism.

“When you don't have a gun, you get shots in response, and you don't run. When you don't have armor, and an armored personnel carrier is coming at you, and you don't leave. That's exactly why the occupation is temporary! It's artificial. Our people, our Ukrainians, don't back down. They do not stop the resistance. They yell to the occupiers: “Go home!” Like a Russian ship! They push them out of our territory. They block roads. Every meter of our Ukrainian land, won by protest and humiliation of the occupiers, is a step towards victory for all Ukraine. It’s a chance for life," - the President said.

We’d like to recall that on February 28, the Ukrainian delegation held its first negotiations with Russian Federation’s representatives near the Ukrainian-Belarusian border. The negotiations ended with the definition of "a number of priority topics where certain solutions have been identified."

The second round of negotiations with Russia did not yield results. The parties agreed on humanitarian corridors for civilians fleeing Russian aggression. However, the Russian army continued to bomb Ukrainian civilian homes.

Particularly in Chernihiv Russian troops shelled settlements with FAB-500 aircraft bombs. Also, in the city of Bila Tserkva in Kyiv region more than 20 houses were destroyed.

The third stage of negotiations is scheduled for March 7.