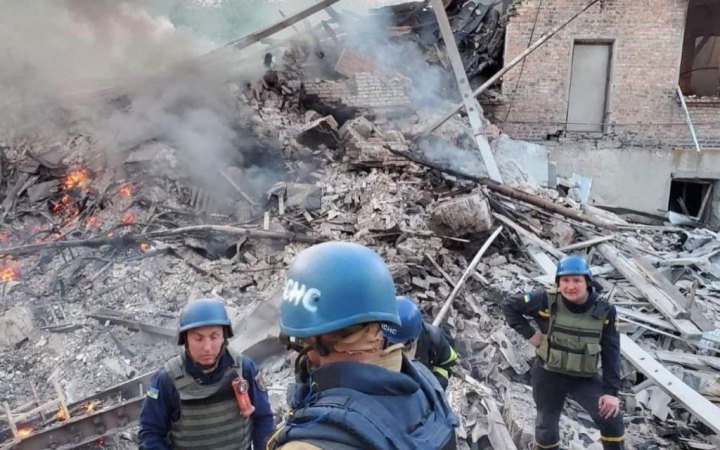 As a result of yesterday's air strike on a school in Belogorivka, Luhansk region, according to preliminary data, all 60 people left under the rubble were killed.

Rescuers evacuated 30 people yesterday, including seven wounded. They also found the bodies of two victims. The attack caused a fire in the school building and in the house of culture, - the Head of Luhansk Regional Military Administration Serhiy Haiday shared in Telegram.

Most likely, all 60 people who remained under the rubble of the buildings died. These are real atrocities of the "russian world": the cynical shelling of a school with a bomb shelter, the killing of children in Pryvillya. Russians do not care whom to kill, if they can’t reach a militarist, they will kill a defenseless child," he said.

Pryvillya was shelled yesterday from Grad MLRS and Uragan SPMRLS. 11- and 14-year-old boys were killed, their 69-year-old grandmother, 12-year-old and 8-year-old sisters were seriously injured and hospitalized. It turned out that the grandmother and her grandchildren had left the shelter for a few minutes, and it was exactly the time when the enemy struck the city.

"Already at night, the russians opened fire on Shypilove. A two-storey house was destroyed there. According to preliminary information, 11 people were trapped under the rubble," Haiday added.

Four houses were damaged in Rubizhne, nine in Severodonetsk, and two more in Lysychansk. One wounded person was evacuated.

The group of occupying troops continues offensive operations in the Popasna and Severodonetsk directions.

In the school in Belogorivka where the enemy struck, almost the whole village had been hiding from attacks. Previously there was a storage room in the club building, but the russian army destroyed it as well. Belogorivka is located near Lysychansk. The russians are trying to make a breakthrough there.