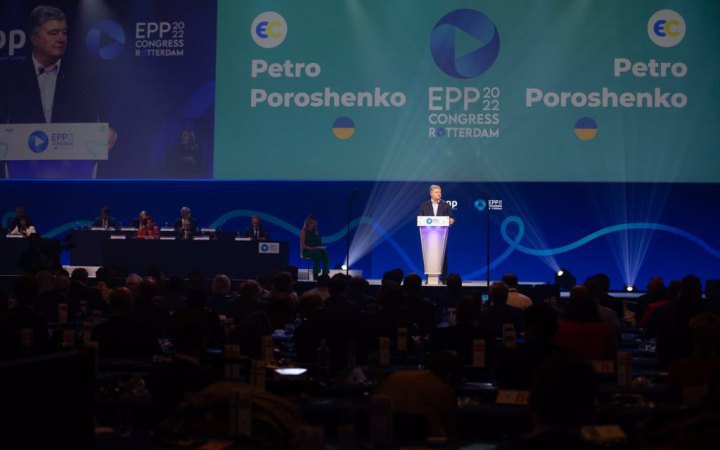 Speaking at the European People's Party Congress in Rotterdam, Petro Poroshenko addressed European partners, asking them to fight together against a common enemy, the Putin regime. Poroshenko emphasized that the future of the European continent is being decided in Ukraine.

"More sanctions at the EU level and around the world! More sanctions every day! I am glad that yesterday European Council took a political decision to implement the sixth package of sanctions, including those on the oil trade. A step has been taken in the right direction, but we need to go further by introducing a total oil embargo," - emphasized Poroshenko.

"Implementing sanctions on Patriarch of the russian orthodox church Kyrylo, a close ally of Putin in war crimes and atrocities in Ukraine, was powerful and correct decision. I am glad that sanctions were implemented against the military responsible for mass killings, rapes, and crimes against humanity in Ukraine, particularly in Bucha. This is an excellent start to the so-called Bucha List and a guarantee that all those responsible for the crimes will be brought to justice," - said the party leader.

Poroshenko also suggested including a gas embargo in the seventh package of sanctions: "The oil and gas embargo will be a powerful weapon against russia. Be sure that money you pay for russian gas and oil will not go to prosperity and democracy in russia; you are sponsoring Putin's military machine," - warned Poroshenko. He also warned Europeans against compromising with Putin: "Any compromise with the Kremlin on Ukraine would legalize his aggression. By doing this, the Free World would recognize that the borders of states can be changed by force and that the free choice of an independent nation can be vetoed. It would betray dozens of thousands of victims and the suffering of millions of Ukrainians."

Petro Poroshenko is sure the world must unite to bring Putin and others to the International Tribunal.

He said that the military blockade lifting of Ukrainian seaports would help save the world from Putin's scenario of global famine.

Poroshenko asked to increase financial and economic support for Ukraine and implement the "Marshall Plan 2.0" for the reconstruction of Ukraine based on EU standards.

"The Ukrainian nation is looking forward to the positive decision of the June European Council meeting on granting Ukraine the status of a candidate country for EU membership. According to the latest polls in Ukraine, 89% of Ukrainians support EU membership and 70% - for NATO membership! I am grateful for the strong and clear position of the EPP on this issue," - said Petro Poroshenko.