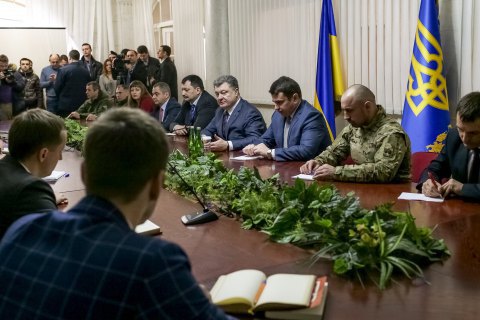 President Petro Poroshenko has held a meeting with the board, detectives and employees of the special operations department of the National Anticorruption Bureau of Ukraine, the president's official website has said.

Poroshenko emphasized that nobody would avoid punishment for corruption if they were proven guilty.

"Nobody is safe from the Bureau’s attention and no networking will provide indulgence or protection," he said.

According to Poroshenko, the NABU includes special operations troops, analysts and detectives. They have all the necessary functions to demonstrate the Ukrainian people and the world the efficiency of the Ukrainian anticorruption programme.

"During the first days, the first weeks of their work they proved that there were neither areas closed to the NABU nor untouchables, nor wide connections," he said.

About 30 members of the special operations department of the NABU were sworn in today. The department will have a total of 96 troops equipped with arms and armour.