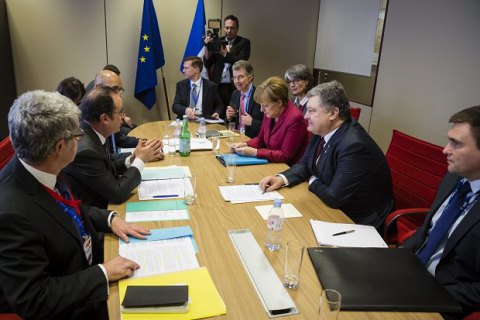 The EU will keep its sanctions on Russia until Moscow implements the Minsk agreements on a Donbas settlement in full.

According to the website of Ukrainian President Petro Poroshenko, he discussed the issue with German Chancellor Angela Merkel and French President Francois Hollande.

The parties expressed concern over the deteriorating security situation in Donbas. They underlined the importance of cease-fire, withdrawal of Russian military hardware and provision of full and unhindered access for the OSCE observers to the entire occupied territory and uncontrolled area of the Ukrainian-Russian border.

The parties also pointed out the importance of holding elections in certain areas of Donetsk and Luhansk regions under the Ukrainian legislation and the OSCE principles provided that the security component is ensured.

Merkel and Hollande reaffirmed that the EU does not recognize the occupation of Crimea by Russia.

Poroshenko, Merkel and Hollande called for an immediate release of Nadiya Savchenko who is illegally held in a Russian prison. The parties said that it was important for all prisoners of war to be released, which is stipulated by the Minsk agreements.

Merkel and Hollande expressed support for the Ukrainian reforms.