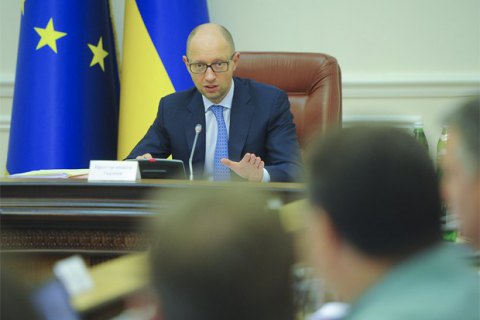 Participants in the negotiations on establishing a new Cabinet of Ministers have arrived at first agreements.

As LB.ua has found out from its sources, the main and the only candidate for prime minister today is parliament speaker Volodymyr Hroysman. The current head of the Presidential Administration, Borys Lozhkin, is eyeing the post of the deputy prime minister for economy.

According to the following configuration, Arseniy Yatsenyuk has five "briefcases." The head of the Natural Resources Ministry has not been defined yet – "haggling" with the Petro Poroshenko Bloc, Fatherland and Oleh Lyashko's Radical Party is still under way. The latter, though, is ready to trade any post the Cabinet of Ministers for the parliament speaker's seat.

According to the prior agreement, Nina Yuzhanina will head the Fiscal Service.

Thus, there are four factions in the coalition: the Petro Poroshenko Bloc, the People’s Front, the Radical Party and Fatherland.

The voting is scheduled for next Tuesday or Thursday.

At the same time, the source notes that almost all the negotiation sides, including the Petro Poroshenko Bloc and the People’s Front, which were previously ready to support Natalie Jaresko for prime minister have now changed their mind. People’s Front members were indignant at Jaresko’s intention to dismiss Interior Minister Arsen Avakov and Justice Minister Pavlo Petrenko, and also at the government’s programme mostly focused on the implementation of IMF requirements. Fatherland" agreed to any candidates for prime minister but Yatsenyuk and Jaresko.

Another source at the presidential administration, who is directly involved in the negotiations, told LB.ua that "four "briefcases" will be enough for Yatsenyuk: the Interior Ministry, the Justice Ministry, the Education Ministry and the Infrastructure Ministry". The negotiations over the fifth one are still on. It is being contested by Tymoshenko and Lyashko.

The presidential administration is not sure whether Lyashko is to join the coalition. Then, the parliamentary majority will have three members: the Petro Poroshenko Bloc, the People’s Front and Fatherland, while more votes can be drawn from unaffiliated MP. Andriy Parubiy is a candidate for the speaker's post for now.

At the moment, there is no clarity as to the heads of the Social Policy Ministry and the National Bank of Ukraine. MPs from different factions are unhappy with Valeriya Hontareva, however the presidential administration has not offered any alternative candidate so far. She is ready to resign, according to sources close to her, if Jaresko and Abromavičius step down too.

It is worth noting that Yatsenyuk was directly involved in discussions on the above mentioned arrangements, which he shared with his entourage. However he says he has not made any final decision yet. Therefore it is quite possible that Arseniy Yatsenyuk will continue making efforts to remain in office. The course of the negotiation process is changing very swiftly.