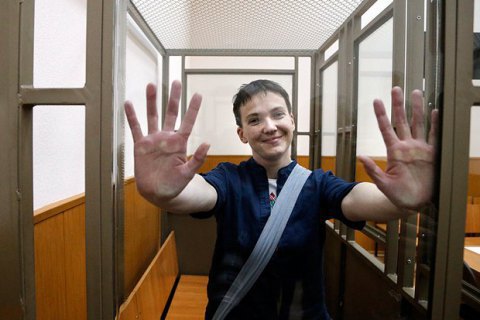 The Donetsk city court in Russia's Rostov Region has sentenced Ukrainian MP and pilot Nadiya Savchenko to 22 years in a penal colony, having pronounced her guilty of murder, attempted murder and illegal crossing of the border into Russia, judge Leonid Stepanenko has said.

According to the verdict, Savchenko was found guilty under Article 105 (murder), for which she is sentenced to 18 years in prison. Ten more years are added for attempted murder. She will have to pay 30,000 roubles (446 dollars) for illegally crossing the border into Russia. Thus she will have to spend 22 years in a penal colony and pay a fine of 30,000 roubles. The term of her punishment is calculated starting from the day of her arrest, which is 30 June 2014.

The prosecution demanded a 23-year sentence for her.

After the verdict was read, Savchenko said that the court "wanked itself but did not come", having sentenced her to 22 years not 23 as the prosecution had requested. She than sang a song about judges who would no longer judge her. People in the room started singing the Ukrainian anthem. The court session was over then.

The trial of Nadiya Savchenko in Russia's Donetsk on charges of murdering two Russian TV journalists in Luhansk Region and illegally crossing the border started in mid-2015. According to the case files, as a member of the voluntary battalion Aydar, she adjusted artillery fire on 17 June 2014 as a result of which the employees of the All-Russia State Television and Radio Broadcasting Company (VGTRK), Igor Kornelyuk and Anton Voloshin, were killed. Russian investigators say she then illegally crossed the border into Russia where she was arrested. According to her defence, Savchenko had been taken prisoner by militants of the self-proclaimed Luhansk People’s Republic before the shelling, during which Kornelyuk and Voloshin were killed, and she was illegally brought to Russia, where a case against her was fabricated.

During a brief court hearing on 6 March, Savchenko made her statement and announced she would continue her hunger strike. Four days later however, Ukrainian consul-general in Rostov-on-Don Vitaliy Moskalenko and lawyer Mark Feigin managed to persuade Nadiya to stop her dry hunger strike.