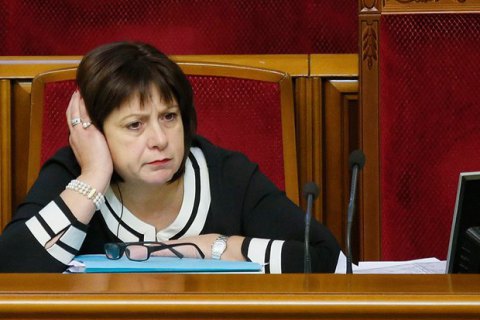 Finance Minister Natalie Jaresko has said she is ready to take on the job of a new prime minister of Ukraine.

"Several weeks ago Ukrainian President Petro Poroshenko and Prime Minister Arseniy Yatsenyuk offered me to start dialogue and present my plan on pulling the country out of the crisis in the fastest possible way," she said on Facebook.

She shared her vision of such plan.

"To rebuild trust and improve the economy, the government has to make a huge leap forward, not just a step or two. In my opinion, only a technocratic government - a team of 'no-one's' people without any political past, subordination to any oligarchs or 'friends' of politicians and no political ambitions for the future - can fulfil these tasks in this political situation. I am ready to form a team which is immediately prepared to work for the benefit of the entire country, all of its citizens, not just particular political or business groups," she said.

She said her technocratic government would be based on five fundamental principles:

- Government members must be loyal exclusively to servicing the people of Ukraine, not themselves, or their parties, or hidden interests of some interested parties. The main criterion of a team member is flawless reputation;

- government members must be absolutely intolerant of corruption and political interference in the work of the executive;

- government members must take no interest in coming election or political career. Their only goal must be the flourishing of Ukraine. Populism is their worst enemy;

- all of them must believe that Ukraine can become successful only thanks to democratic and economic freedoms, including by implementing the EU-Ukraine association agreements and the IMF programme;

- government members must be experienced crisis managers and have a track record of successful reforms and business management.

She also list parliamentary support or a new coalition agreement as one of the conditions.

According to Jaresko, she has no political ambitions at all.

"My only desire is to implement reforms in Ukraine to ensure economic growth, develop a democratic society and improve the welfare of every Ukrainian," she concluded.

Speaker Volodymyr Hroysman is also being considered for the prime minister's post.