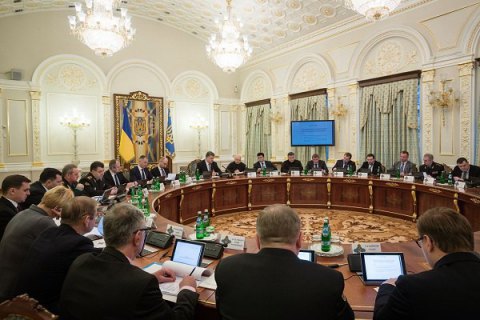 The National Security and Defence Council (NSDC) has endorsed the sanction list of those involved in violating the rights of Ukrainian MP Nadiya Savchenko, film director Oleh Sentsov and other Ukrainians held in Russia, the president's press secretary, Svyatoslav Tseholko, has tweeted.

"The NSDC approved the sanction "list of Savchenko-Sentsov," he said.

The common sanction list includes the heads of the Russian Federal Security Service (FSB), employees of the Investigations Committee, prosecutors, judges and servicemen, the NSDC said on its website.

"The list includes individuals involved in the kidnapping, illegal detention, torture, fabrication of cases, organization and holding of pre-ordered 'verdicts' of Russian courts which are good-for-nothing from the legal point of view. Among the individuals on the sanction list are the heads and employees of the FSB, the Russian Investigations Committee, prosecutors, judges, servicemen and other," the statement reads.

At the meeting, President Poroshenko stressed that Ukraine would never recognize the "verdicts" of Russian courts concerning Ukrainians illegally held in Russia.

Poroshenko instructed the NSDC to expand the sanction list by including Russian nationals involved in the persecution of Crimean Tatars in Crimea occupied by Russia.

On 17 March, President Petro Poroshenko handed the list of proposals on sanctions against persons responsible for the fake trial of Nadiya Savchenko over to European Council President Donald Tusk. The list also includes the persons involved in the persecution of Ukrainians Oleh Sentsov, Oleksandr Kolchenko and Hennadiy Afanasyev.