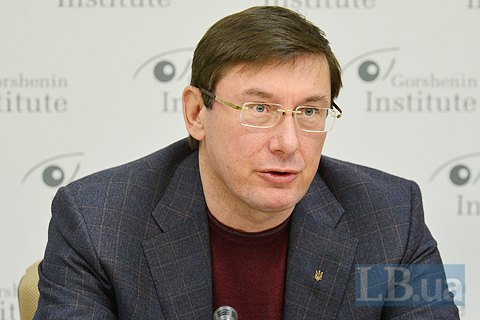 At today’s meeting, the faction heads are to consider the candidates for the post of the Ukrainian Prime Minister, head of the Petro Poroshenko Bloc faction, Yuriy Lutsenko, said, the faction official website cites.

The main question of the meeting is also the renewal of the parliamentary coalition.

Lutsenko has also informed that he as a representative of the biggest faction will put forward a proposal concerning a new format of the government as a start of a new economic policy.

"The coalition of the deputy factions is to name a candidate for a new premier. Not Petro Poroshenko Bloc, not the "People's Front" or "Fatherland" but the coalition of factions. We have a plan and we will offer it to our colleagues, whose support is necessary for the President to introduce a new candidate," he explained.

"Today, it will be clear which faction is ready to take this responsibility and offer the majority for a new premier and a new government," he added.

As reported before, Arseniy Yatsenyuk’s Cabinet of Minister lost the support in the Parliament and has been actually hanging in the balance since mid-February.

On 22 March, it became known that Finance Minister Natalie Jaresko was ready to become a new Prime Minister and head the technocratic government. The condition of her agreement was the support in the Parliament or a new coalition agreement.

Apart from Jaresko, the candidacy of the Parliament Speaker, Volodymyr Hroysman, is also under consideration.

Petro Poroshenko stated that he would support any candidate for premier suggested by the coalition.