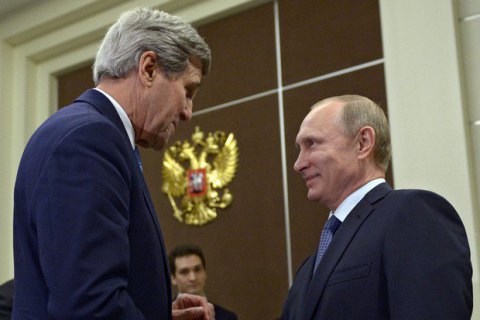 US Secretary of State John Kerry has called on the Russian authorities to allow Nadiya Savchenko, who was convicted in Russia, to return to Ukraine, the BBC has said.

"I did raise the case of Nadiya Savchenko and her conviction and her sentencing with hopes that she will be allowed to return to Ukraine and as a matter of humanitarian interest that this case could be resolved immediately, as well as all others who are unlawfully detained," Kerry said at a joint news conference with Russian Foreign Minister Sergey Lavrov in Moscow.

Kerry said that he had also raised this issue with Russian President Vladimir Putin.

"He answered my questions and gave me a sense that this is hopefully something that at an appropriate moment we may or may not be able to deal with," Kerry said.

Lavrov, for his part, said that Kerry "got the answer which everyone actually knows" when he raised the Savchenko issue.

"We have reiterated that the health of Nadiya Savchenko is nothing to be worried about," he said.

According to Lavrov, Russia and the USA reiterated the non-alternative character of the political settlement based on the Minsk agreements.

"We have had a long discussion about Ukraine, and despite some details, we have no disagreements about the fact that the Minsk agreements must be implemented, and this has no alternative, including through the direct dialogue between Kyiv, Donetsk, and Luhansk, including on such issues as enhancing security and promotion of political process," Lavrov said.

As reported earlier, on 22 March, the Donetsk city court in Russia's Rostov Region sentenced Nadiya Savchenko to 22 years in a penal colony, having pronounced her guilty of murder, attempted murder and illegal crossing of the border into Russia.

The trial of Nadiya Savchenko started in mid-2015. According to the case files, as a member of the voluntary battalion Aydar, she adjusted artillery fire on 17 June 2014 as a result of which the employees of the All-Russia State Television and Radio Broadcasting Company (VGTRK), Igor Kornelyuk and Anton Voloshin, were killed. Russian investigators say she then illegally crossed the border into Russia where she was arrested. According to her defence, Savchenko had been taken prisoner by militants of the self-proclaimed Luhansk People’s Republic before the shelling, during which Kornelyuk and Voloshin were killed, and she was illegally brought to Russia, where a case against her was fabricated.