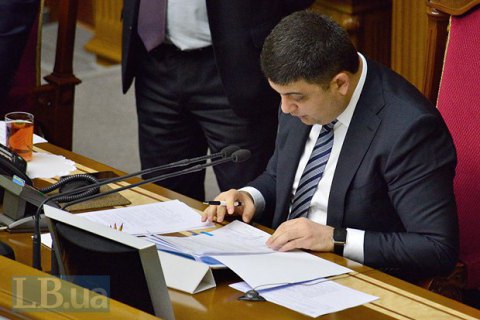 The presidential administration has drafted a new lineup of Volodymyr Hroysman's government in case the current parliament speaker is elected as prime minister.

Overall, this lineup has been in the know for a while, albeit some recent updates. As far as LB.ua is aware, the key posts will be assigned as follows:

- Deputy Prime Minister and Economic Development Minister Borys Lozhkin. He is still a top candidate despite his recent statement that he is inclined to reject any offer of government job. If Lozhkin remains firm about his refusal, he can be replaced by Oleksandr Shlapak;

- Infrastructure minister, to be nominated by the People's Front;

- Ecology and natural resources minister, to be nominated by Fatherland;

- Minister of the Cabinet of Ministers Volodymyr Slyshynskyy;

Oleh Lyashko's Radical Party will only enter the coalition if it is entitled to the speaker's post, to which the People's Front flatly objects.

Incumbent Prime Minister Arseniy Yatsenyuk is waiting for President Petro Poroshenko to visit the USA on 30 March-1 April, where he expects him to be advised to preserve the current layout.

Earlier, Hroysman also mentioned Deputy Economic Development Minister Maksym Nefyodov among people he would like to see in his team.