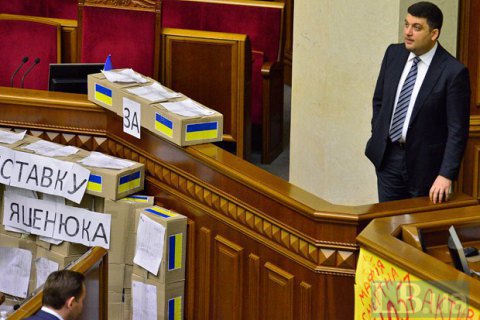 The Petro Poroshenko Bloc (PPB) faction has nominated speaker Volodymyr Hroysman for prime minister, according to the Ukrinform news agency.

"The PPB faction has nominated Hroysman for prime minister of Ukraine on behalf of our political force. Just as our colleagues from the People's Front asked us: 'Give us a candidate'. So we are giving them a candidate," MP Oleksiy Honcharenko told journalists after the faction meeting.

He added that the faction also discussed candidates for a new government however no decision to this effect was taken.

PPB MP Serhiy Leshchenko said that he and MP Mustafa Nayem abstained when the faction was voting for Hroysman's nomination while MP Natalya Novak voted against it.

MP Serhiy Kaplin said on Facebook that the PPB had left the coalition, which the European Ukraine parliamentary coalition is effectively no longer.

"The PPB has left the coalition. At the faction, I suggested that we leave the coalition. MPs voted in favour almost unanimously: only five abstained," he said.

The website of the Segodnya daily quoted MP Oleksiy Honcharenko as saying that faction leader Yuriy Lutsenko was planning to announce this from the parliament rostrum next morning.