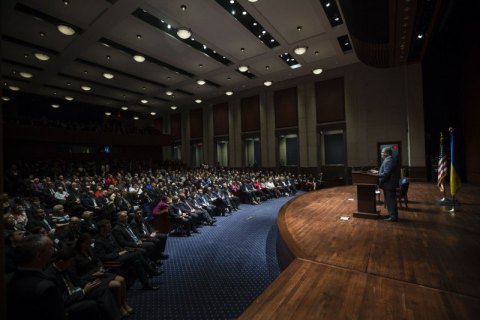 President Petro Poroshenko speaking at the forum "Ukraine’s Battle for Freedom" in Capitol (Washington), called on the international community to start supplying weapons to Ukraine.

"I could never explain one thing to myself and to my compatriots – reluctance of the international community to supply weapons to the legitimate Ukrainian government and regular Ukrainian Army which holds the line against the attack on the international order. I think it is time to revise this attitude.Every effort applied to protect Ukraine is an investment into long-term security of the West and sustainability of democratic values", he said.

The whole text of the President’s speech in English is available on his website.

"We got security assurances under the 1994 Budapest Memorandum about sovereignty, territorial integrity and independence of my country. Very clear. Give up nuclear weapons and receive security guarantee. Sounds good. But what has it turned to be in reality? Russia simply defied its assurances to Ukraine and committed a direct armed aggression against my state," he stated.

"We, Ukrainians, are entitled to call upon the Western guarantors under the Memorandum to take all possible efforts to restore international justice and order, to help us in our battle for survival and independent, democratic and European future," Poroshenko pointed out.

As reported before, the Budapest Memorandum is a memorandum on security assurance by Ukraine’s accession to the Treaty on the Non-Proliferation of Nuclear Weapons, an international treaty signed on 5 December 1994 between Ukraine, the USA, Russia and Great Britain on the non-nuclear status of Ukraine. The agreement includes security assurances against threats or use of force against the territorial integrity or political independence of Ukraine.

On 4 March 2014, Russian President Vladimir Putin states that he did not acknowledge his liability as to the guarantee of the territorial integrity of Ukraine according to the Budapest Memorandum.