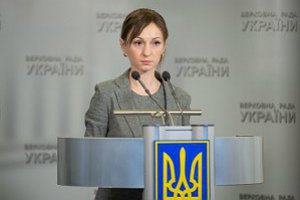 Suslova was elected to parliament on the Self-Help party's list but was expelled by its faction after she voted in favour of appointing Viktor Shokin as prosecutor-general. She has been unaffiliated since February 2015.

Oleksandr Bryhynets and Dmytro Bilotserkivets joined the Petro Poroshenko Bloc faction on 29 March. They were sworn in as MPs after MPs Yehor Firsov and Mykola Tomenko were unseated for leaving he faction.

Earlier, one of the senior members of the prime minister's People's Front faction, Viktoriya Syumar, said that the Petro Poroshenko Bloc and the People's Front were trying to forge a coalition of two. In her words, this would require about 10 MPs to join either faction.