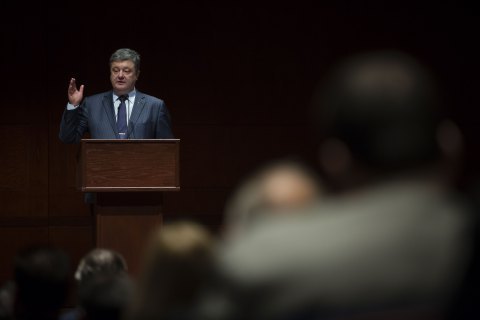 President of Ukraine Petro Poroshenko believes that American President Barack Obama can play a decisive part in settlement the conflict in Donbas.

"I believe that there is a real chance for President Obama to mark his presidential term with settlement of the conflict in Donbas," he said speaking at the Forum "Ukraine’s Battle for Freedom" in Capitol (Washington). The presidential election will take place on 8 November, Barack Obama will not be participatineg.

According to Poroshenko, in the times of global weakness, there is a thing that counts more than anything else – leadership, which is a privilege and a heavy burden at the same time.

r"There are so many reasons to avoid leadership: indifference, fatigue, self-doubt. And there is only one reason to carry it: you have it in your blood. In these times of doubt, I urge America to be strong and believe in itself – just like people of goodwill worldwide keep believing in America. Don’t let pragmatism make you forget about values, with freedom being at the top of them. Don’t let America become small-minded," the president urged.

Poroshenko thinks that it is high time to boost Ukraine-US bilateral dialogue and to upgrade the strategic alliance between the countries and to channel the intense cooperation in defence and security into a comprehensive bilateral security agreement.