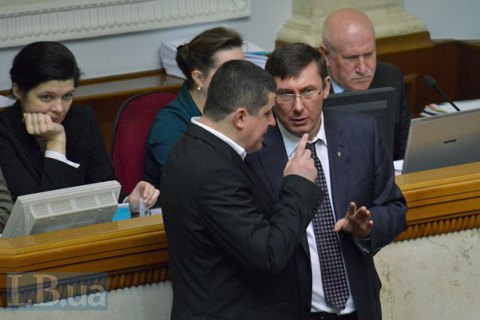 The leader of the Petro Poroshenko Bloc faction in parliament, Yuriy Lutsenko, has warned his faction members that unless a new prime minister is appointed on 13 April, an early parliamentary election would be called, a source in the faction told LB.ua.

He said that the talks on a new Cabinet of Ministers had borne no fruit and are again "where they were yesterday".

Lutsenko also said that Poroshenko had set the deadline - 18:00 [Kiev time, 15:00 gmt]. "Tomorrow we either make a decision or go for an election," a source quoted Lutsenko as saying.

After lunch, some leaders of the Petro Poroshenko Bloc and the People's Front have started preliminary consultations with MPs on chances of supporting a candidate for prime minister other than Volodymyr Hroysman.