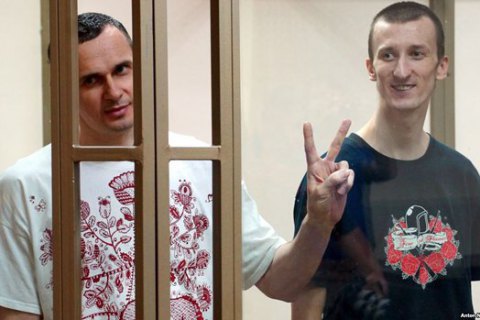 The Russian Justice Ministry has instructed the penitentiary service to prepare the documents required for the transfer of Oleh Sentsov, Oleksandr Kolchenko, Hennadiy Afanasyev and Yuriy Soloshenko to Ukraine where they are expected to continue to serve their terms, the RIA Novosti news agency has quoted the ministry as saying.

"As per Ukraine's requests received on 10 March 2016, the Russian Justice Ministry instructed the Federal Penitentiary Service, in its letters dated 25 March, to prepare the necessary documents to decide on the transfer of the mentioned convicts and check the presence or absence of reasons which would impede this transfer. A report to this effect was sent to the Ukrainian Justice Ministry the same day," the ministry's press service said.

Russian federal courts will have a final say on the matter.

On 25 August 2015, the North-Caucasian district military court in Rostov-on-Don sentenced Ukrainian film director Oleh Sentsov to 20 years in a high-security prison for setting up a terror group, activist Oleksandr Kolchenko to 10 years for participation in this terror group.

Hennadiy Afanasyev was sentenced to seven years in prison by the Moscow city court in a related case on 25 December 2014. Yuriy Soloshenko was found guilty of espionage by the same court and sentenced to six years in a high-security prison.

In Ukraine, they are widely seen as political prisoners held by Russian on trumped up charges.